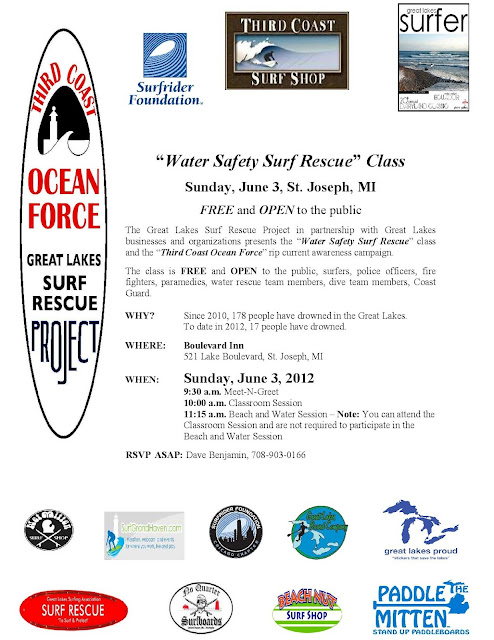 As Drownings increase at alarming rate

“The drowning numbers are astounding,” said Ryan Gerard, owner Third Coast Surf Shop in St. Joseph and New Buffalo. “As more people enjoy these freshwater inland seas, it is imperative that the dangers associated with them are recognized and proper precautions are taken, especially when waves and rip currents are active.”

“The water safety and surf rescue techniques local surfers have been using for decades are taught in the classes,” Gerard added.  “It’s crucial to educate the public and save lives.”

The “Water Safety Surf Rescue” class is FREE and open to everyone; i.e. the general public, surfers, first responders, and professional water rescue personnel.   To RSVP contact Dave Benjamin at 708-903-0166.

The class will teach participants how to:
·         Recognize the danger of the surf environment keeping personal safety as THE primary responsibility
·         Understand rip currents; i.e. how, where, and why rip currents occur; How to survive rips;
·         Know the “Signs of Drowning” – How to identify a person in trouble from within a crowd.
·         Summon help
·         Use a surfboard or other flotation device to rescue a person in distress or in a rip current
·         React when encountering swimmers who have suffered an injury
·         React to an unconscious victim
·         Enroll in lifesaving, first aid and CPR training from accredited agencies.

The class will meet at the Boulevard INN, 521 Lake Boulevard, St. Joseph, MI.
9:30 a.m. EST: Meet-n-Greet
10:00 a.m. EST: Classroom Session
11:15 a.m. EST: Water Session at St. Joseph’s Silver Beach or Tiscornia Beach (depending which way the wind blows/waves, etc. The beach location will be decided by the end of the classroom).

The Great Lakes Surf Rescue Project, Inc. (GLSRP) is about saving lives. It is a nonprofit corporation that is a Chapter of the National Drowning Prevention Alliance (NDPA), the 2011 “Lifesaver of the Year” award winner, presenter at the NDPA’s 11th Annual Symposium, and the 2012 winner of the “Outstanding Service to the Great Lakes Community” award presented by the Dairyland Surf Classic, Sheboygan, WI. The GLSRP tracks drowning statistics, teaches “Water Safety Surf Rescue” classes, and leads the “Third Coast Ocean Force” rip current awareness campaign on the Great Lakes.