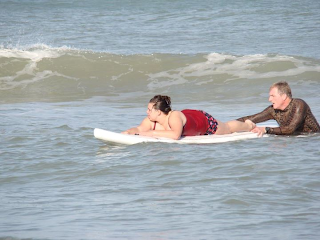 FOR IMMEDIATE RELEASE – February 26, 2012
Contact:
Great Lakes Surf Rescue Project
Dave Benjamin, Executive Director and Media Relations, 708-903-0166
Bob Pratt, Executive Director, 517-643-2553
NDPA’s Lifesaver of the Year Award Winner
Assists rescue while on vacation in Florida
INDIAN HARBOR BEACH, FL & GREAT LAKES, USA – On Friday, February 24, 2012, Bob Pratt, executive director of the Great Lakes Surf Rescue Project, assisted three Brevard County lifeguards in the battle against offshore winds to rescue three people who were swept out to sea on an inflatable raft. (Photo album of the rescue.)
Pratt saw the initial start of the rescue from his 10th floor hotel room.
“I saw the guards take off and thought they were doing a training exercise,” said Pratt.  “When I saw how far they were paddling out, I got the binoculars out and saw the lifeguards about two miles offshore towing an inflatable raft with three people on board.”
Pratt called 911 to request marine backup, but his call was transferred to three different departments (the sheriff’s department, fire department, and coast guard) only to find out that there was now rescue boats or jet skis available.
Frustrated, Pratt ran to the beach and paddled about half mile out to the group and put one woman on his 14’ Stand Up Paddleboard (SUP).

Overall, the entire rescue spanned about five miles of open water and took over two hours to bring the victims in.
“Had the guards not noticed them or made contact they would have been many miles out to sea and in pitch darkness within three hours,” Pratt added.  “What is crazy is that they do not have backup from jet-skis or other rescue boats. One ski would have made this rescue in less than ten minutes. They did send a helicopter, but it had no rescue capability.”
“Wow! Right place at the right time again, Bob,” Lori Stoll-Westlake said on FaceBook.
“Offshore winds pose problems that the public needs to be aware of on the ocean and the Great Lakes,” Pratt concluded.
On June 10, 2010, in Holland, Wisconsin, nine-year-old Sofia Khan from Illinois was vacationing with her family in eastern Wisconsin when the girl drifted away from shore in a kayak.  The girl's father tried to swim out to the kayak, but strong winds pushed it farther and faster than he could swim.
OTHER GREAT LAKES SURF RESCUE PROJECT NEWS
###
MORE INFORMATION about the Great Lakes Surf Rescue Project
IN PARTNERSHIP WITH – List of Businesses and Organizations
In the News – Overall Media Coverage
Posted by David.Benjamin at 12:30 PM