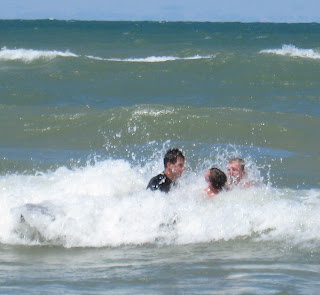 “WOW this is amazing,” said Bob Pratt, Executive Director of the Great Lakes Surf Rescue Project. “I'm truly honored. I really consider this as a team award – the result of a team effort. We have a lot of community support through residents, businesses and organizations.”
“Without David Benjamin's guidance and coordination neither Nick Rymut nor I would have been at the beach that day,” Pratt added. “Without the partnership of Third Coast Surf Shop and all of our other partners the class might not have happened.”
The nomination for this award was based on the rip current rescue in New Buffalo August 28 and the GLSRP’s 2011 tracking of Great Lakes drowning statistics, six “Surfboard Rescue Techniques” classes, and rip current awareness campaign along the coast of Lake Michigan
Last year six surf rescue classes were taught to the general public, lifeguards, police officers, fire fighters, water rescue teams and dive team members. A member of the U.S. Coast Guard even attended the July 17 class in Frankfort, MI.
Pratt’s dedication for water safety will be on the forefront of drowning prevention throughout the Midwest in 2012.
Pratt retired from the East Lansing Fire Department January 20th where he spent 12 years as a firefighter and paramedic and 12 years as Fire Marshal. He will now take the helm of the Surf Rescue Project full time.
“I'm writing a new chapter in my life, a new career.  I'm really excited to see how much we can accomplish with the Great Lakes Surf Rescue Project!”
THE SURF RESCUE
On August 28 approximately 30 minutes after teaching the “Surfboard Rescue Techniques” class in New Buffalo, MI, Bob and one of his class participants, Nick Rymut, rescued a boy drowning in a rip current. (Nick made the initial contact with the boy and Bob assisted – teaching all the way. There’s links to pictures of the New Buffalo rescue and surf rescue class, and TV news coverage of the Grand Haven class below.)
Nick, a firefighter and paramedic, for the Lockport Township Fire Department in Illinois was catching some surf after the class and immediately jumped into action when he saw the boy caught in the rip current.
The boy was displaying the signs of drowning in the thick surf – facing shore, mouth at water level, a terrified look in his face, and ‘climbing the ladder’ motion in the water.


Bob was standing on shore near a lifeguard stand speaking with a lifeguard and New Buffalo police officers when he saw the boy displaying the signs too. He then sprinted into the water to assist. 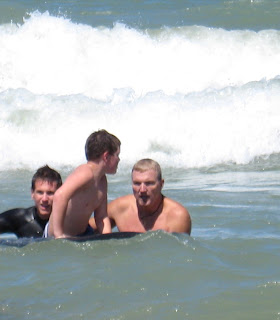 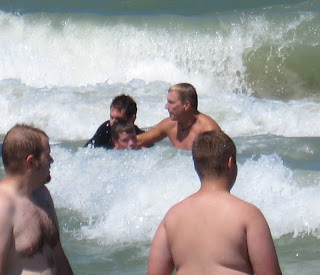