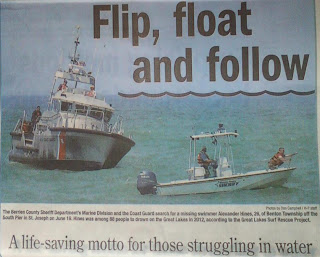 GREAT LAKES, USA – The Great Lakes Surf Rescue Project (GLSRP) endorses the updated Rip Current Survival Strategy created by the Michigan Sea Grant titled, "Flip, Float, and Follow". [Similar to the fire safety technique, “Stop, Drop, and Roll” if you ever catch on fire.]  The GLSRP has promoted the “Flip, Float, and Follow” rip current survival strategy through its “Water Safety Surf Rescue” classes this summer and it has received over 30 media mentions (Listed below).

Now the GLSRP will be taking this updated rip current survival strategy to an international audience at the 2nd International Rip Current Symposium Nov. 1st, 2012 in Sydney, Australia.

How to use the “Flip, Float, Follow” Rip Current Survival Strategy

1.  FLIP:
Flip over onto your back and float.

2.  FLOAT:
A.   Float to keep your head above water.
B.   Float to calm yourself down from the panic and fear of drowning.
C.   Float to conserve your energy.

3.  FOLLOW:
While you are floating, you are following the current. Follow the current to assess which way it is pulling you.Then swim perpendicular to the currents flow until you are out of it and then swim toward shore. If you are too tired to swim to shore, continue to float and signal someone on shore. Also, the waves may eventually bring you back to shore.

2.      September 11, 2012
Traverse City Record-Eagle
“Great Lakes drownings: 89 so far this year”
http://record-eagle.com/local/x550070475/Great-Lakes-drownings-89-so-far-this-year/print
Benjamin said the chief rule for swimming in the Great Lakes is respect for the water's power. He encourages swimmers to follow the Michigan Sea Grant's "Flip, Float and Follow" strategy when caught in a rip current. The first step is for swimmers to flip onto their back and float to conserve energy and fight off a sense of panic. The next step is to follow the current and swim perpendicular to the current's flow, until the swimmer is able to emerge. "When you are floating, you can calm down and assess which way it's pulling you," Benjamin said. "As long as you are floating, you are alive. As long as you are struggling, you are drowning."

3.      September 04, 2012
WNDU 16
“Great Lakes drownings hit 87”
http://www.wndu.com/home/headlines/Great-Lakes-drownings-hit-87-168499426.html
The project continues to push the technique “Flip, Float and Follow.” If caught in a rip current, don’t panic. Instead, swimmers should flip onto their back, float to see where the water is moving, and then swim parallel to the shore.

4.      August 27, 2012
Post-Tribune
Jerry Davich Colum: ‘I think Corey would be proud of me’
http://posttrib.suntimes.com/news/davich/14700064-452/jerry-davich-i-think-corey-would-be-proud-of-me.html
“Everyone who enters the Great Lakes should know about the ‘Flip, Float, and Follow’ rip current survival campaign,” he said. “As long as are floating you are alive.”  The eventual goal of the Michigan Sea Grant’s “Flip, Float, Follow” rip current survival strategy is to develop a national curriculum similar to the Fire Prevention Services’ “Stop, Drop and Roll” program.
“Ask anyone anywhere in the United States and they probably know ‘Stop, Drop and Roll,’ ” he noted, hoping “Flip, Float, Follow” can catch on as well.

5.      August 23, 2012
AccuWeather.com
“74 Confirmed Drownings in the Warm Great Lakes this Year”
It is extremely important to be familiar with memorable safety sayings, including "Flip, Float, Follow" that can save your life if you find yourself struggling in a drowning.

6.      August 17, 2012
AccuWeather.com
“Before Summer Ends, A New Must-Know Safety Tip For All Swimmers”
http://www.accuweather.com/en/outdoor-articles/beach-and-marine/flip-float-and-follow/70216
From there, Benjamin made it to shore by following the Flip, Float and Follow strategy.

"FLIP, FLOAT, FOLLOW"
The flip, float and follow saying was created by the Michigan Sea Grant to be memorable and help save people in a drowning incident.

Flip over onto your back and figure out which way the current is flowing.
Float to keep your head above water and conserve energy.
Follow the current until it weakens. Rip currents dissipate quickly as they move away from the shore into deeper water. Ride it out and swim perpendicular to the current back to shore.

"We believe flip, float and follow will work in any body of moving water. The whole premise is as long as you're floating, you're alive. You calm yourself down and follow the best action to get out of the water. We believe a lot of drowning is ... because people panic, they're in water, and it is the instinctive drowning response," Benjamin said. "When someone goes into the instinctive drowning response, they've got between 15 and 45 seconds before final submersion."

The flip, float and follow saying was modeled after the famous "stop, drop and roll."

7.      August 19, 2012
Fox 28
“Mom of drowning victim wants to prevent future drownings”
http://www.fox28.com/story/19315144/mom-of-drowning-victim-wants-to-prevent-future-drownings
The best thing to remember if you do get into trouble in the water, Flip, float, and follow.  Pratt said, "flip over onto your back, which puts you in a better position to breathe.  Float cause as long as you're floating you're not drowning.  See which way the current is taking you and follow the best course out."  Those tips are exactly what Forystek hopes to teach to others.  "We're surrounded by water and I think kids need to know what they need to do."

WNDU
“Victim’s family joins Surf Rescue Project to teach water safety”
http://www.wndu.com/home/headlines/Victims-family-joins-surf-rescue-project--to-teach-water-safety--166709466.html
Flip, Float, and Follow. Those are the three statements a rescue project in New Buffalo is teaching beach-goers and swimmers about water safety awareness across the Great Lakes region.  Cory McFry's mother was at Sunday's class. Her son, Cory disappeared in July near the Portage Lakefront Riverwalk. He was swimming with friends when he was swept away by currents.  The class emphasizes a Flip, Float, and Follow survival strategy meant to keep people’s minds from panicking, and instead focusing on those three body movements.  The class is helpful, but residents have to sign up to get them, so Cory's said she's pushing for programs like these to be taught in schools.  "It should be something that they push in the schools. It should be something they teach in health class, or gym class or swimming class,” said Cory’s mother, Christine Forystek. Or you know, and they should start from elementary school and work their way up. You keep pushing it and you keep pushing it, and you're going to save a life. At least one, if not, hopefully several."

11.  August 10, 2012
NBC Chicago
Chicago's, Brant Miller, getting the Flip, Float, Follow message out to the public during his weather forecast. http://www.nbcchicago.com/​video/#!/weather/video/​Forecast--Beautiful-Weekend-/​165792776

12.  August 10, 2012
Chicago Tribune
“August a deadly month for Lake Michigan rip currents – Wind, waves, crowds can make a dangerous combination”
http://www.chicagotribune.com/​news/local/​ct-met-rip-currents-0810-201208​10,0,5832654.story If a swimmer gets in a rip current, the Great Lakes Surf Rescue Project recommends that the person roll on his or her back and float to determine which way the current is moving. Then the person should swim perpendicular to the current and once out of it, back toward shore.

13.  August 7, 2012
ABC 7 Chicago
“Warning about rip currents on Lake Michigan”
http://abclocal.go.com/wls/story?section=news%2Flocal&id=8765524
"If you're a poor swimmer, continue floating. As long as you're floating, you're alive. As long as you are struggling you are drowning," said Benjamin.

16.  July 26, 2012
Post-Tribune
“Our view: Great lake can mean great peril”
http://posttrib.suntimes.com/opinions/13776801-474/our-view-great-lake-can-mean-great-peril.html
The Great Lakes Surf Rescue Project wants to help by educating people on ways to protect themselves from drowning with a “Flip, Float, Follow” slogan similar to “Stop, Drop and Roll.”

18.  July 21, 2012
WDIO
“Water Safety Class Educates Swimmers on Rip Currents”
http://www.wdio.com/article/stories/S2698599.shtml?cat=11802
If you find yourself in a rip current, Pratt says you should float on your back and let the current sweep you out. Once you're able to swim, he recommends swimming parallel to the shore until you're able to swim out of the current and back to safety.

21.  July 2, 2012
WWMT
“Summer Water Safety: Rip Currents”
http://www.wwmt.com/template/cgi-bin/archived.pl?type=basic&file=/shared/newsroom/top-stories/stories/archive/2012/07/FlZBDHOW.xml
"We recommend you use flip, float and follow," Pratt said. "Flip over on to your back and calm down because panic is really what kills people; float and see what direction the current is taking you, and follow the safest course of action back to shore."

22.  June 23, 2012
MLIVE
Great Lakes swimming demands keeping kids within an arm's reach, surf rescue group advises
http://www.mlive.com/news/kalamazoo/index.ssf/2012/06/great_lakes_swimming_demands_k.html
He recommended that all Great Lakes swimmers learn the "flip, float, follow" technique to use if they do get caught in rip currents. That strategy advises  swimmers to flip onto their backs and float, allowing time to calm down, then to  follow the current long enough to learn which direction it is carrying them-- not always straight out from shore. This gives swimmers a chance to signal for help, or to swim at an angle out of the current.  "The biggest message is if you are floating, you're head's above water and you're alive. Don't expend energy swimming against the current," Benjamin said.

24.  June 13, 2012
WGN 9 Chicago
Teen taken to hospital after drowning incident
http://www.wgntv.com/news/wgntv-drowning-at-north-ave-beach-teen-taken-to-chicago-hospital-20120612,0,1553939.story
At the end of the video clip, the current drowning stats (25) are mentioned, and there's a phone interview with Bob Pratt and he acknowledges the Michigan Sea Grant’s Flip, Float, Follow rip current survival campaign.

26.  May 30, 2012
Medill Reports Chicago
Drowning spikes 82 percent over last year
http://news.medill.northwestern.edu/chicago/news.aspx?id=206250
“If you are already in the water and unable to reach safe shore, try flip, float and follow. The rescue project suggests that people flip over onto their backs and then float to keep the head above water and conserve energy. The third step is to follow or flow with the current to save energy. “Most current dissipates quickly as people move away from the shore into deeper water,” Benjamin said. “Ride it out, figure out which direction the water is flowing and swim perpendicular to the current toward shore.”

27.  May 31, 2012
ABC 57
Saving Lives This Summer
http://www.abc57.com/news/local/van-buren/Preventing-Summer-Drownings--155889485.html
It's also important to educate your children about the waters and watch them for the entirety of their time in the water. For instance, 10-year old Juliette Benjamin has been swimming since she was three, and knows exactly what to do in a rip current.  "Flip, float and follow. Flip on your back to calm yourself down. float to conserve energy, and follow the rip current to determine which way it is carrying you then swim diagonally to the shore for help" said Benjamin.

29.  May 26, 2012
MLIVE
New advice for rip current escape may help Great Lakes swimmers this summer
http://www.mlive.com/news/kalamazoo/index.ssf/2012/05/new_advice_for_rip_current_esc.html
Swimmers caught in the grip of a rip current may have a new weapon to fight back—an easy- to-remember, easy-to-use strategy to get out of the current and allow retreat to shore or rescue.  "Flip, float and follow," advises the Great Lakes Surf Rescue Group, water safety experts who have been studying ways to help prevent drownings in the Great Lakes.  Bob Pratt, educational director for the group, said current advice for getting out of rip currents — swim perpendicular to shore instead of against the current -- is generally sound: Stay calm to conserve energy, swim out of the current in a direction following the shoreline, then, when out, swim at an angle -- away from the current -- toward shore.